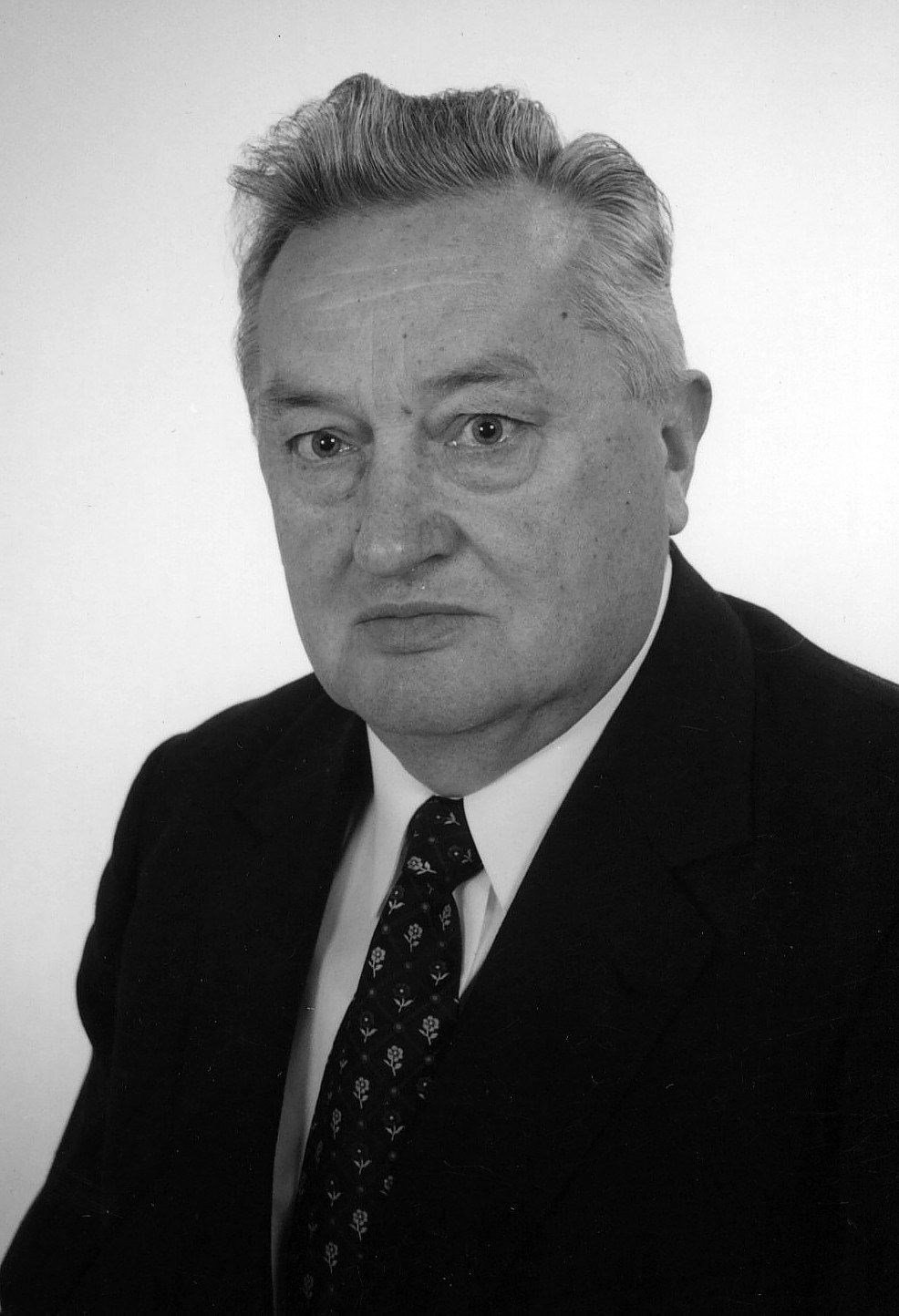 On January 1, 2017, the world learnt about the passing of Wladyslaw Gwardys – Warka Honorary Citizen, perennial Chair of the Wiktor Krawczyk Warka Branch of the Polish Tourist and Sightseeing Society (Polskie Towarzystwo Turystyczno-Krajoznawcze, PTTK), deserving activist, sightseer, regionalist, knowledgeable and passionate supporter of the town of Warka, and friend to our Museum.

Wladyslaw Wincenty Gwardys was born on January 22, 1933 in Warka as the son of a couple of farmers: Wladyslaw (1897-1956) and Jozefa from the Buczko family (1910-1983). The family cultivated patriotic traditions. The father disarmed Germans in 1918, fought in the Polish-Soviet War of 1920, and was a member of the Home Army. The Warka in Gwardys childhood memories consisted of two bridges, two churches, a synagogue, school, firehouse, and the Lubert Brother's Building Hardware Factory (Fabryka Okuc Budowlanych "Bracia Lubert"). On June 29, 1939, the father of the then six-year-old Wladyslaw, commonly known as Wladek, participated in the soil collection ceremony in the Warka-Winiary park. The soil was to be brought to the United States to the last battlefield of Casimir Pulaski at Savannah. Wladyslaw Gwardys senior was not just an average farmer. He read a lot, was ambitious, and cared for his family. Wladek remembered his father as a patriot, and the Warka of his childhood as a town of aspirations and perspectives.

On September 1, 1939, when the war broke out, Wladek was six years old. During the occupation, he attended elementary school and gained further education during secret tutoring sessions. On March 29, 1941, his parents had another son named Mirek, who grew up to be a teacher, governor of the Warka town and municipality, and farmer, also active in a nature protection organization called the League of Nature Conservation (Liga Ochrony Przyrody). Due to the occupation, Gwardys matured quickly. The eleven-year-old boy knew fear, had already seen death, lived through displacing by war, wandered about subsequent villages of the Grojec district, and finally returned to the burnt-down town. His memories from that time found their way to a research paper by Remigiusz Matyjas entitled "The last war days in Warka and its environs; as remembered by Wladyslaw Gwardys," and can be found in the quarterly scientific journal by the Independence Museum in Warsaw (Muzeum Niepodleglosci w Warszawie) called "Independence and Memory" ("Niepodleglosc i Pamiec"), 2014, issue 3&4. Furthermore, some of his memories were recorded on camera as part of the "Warka – a place touched by history" ("Warka – miasto dotkniete historia") exhibition.

After the war, Wladyslaw Gwardys attended a legendary high school in Warka-Winiary and passed his matura exam in 1951. He would often remember those times, telling stories about the teachers and schoolmates, going back to the carefree life, and interesting sightseeing tours. It was his idea to have "Winiarczycy" meet annually on May 3 at the Pulaski Manor to share memories.

In 1955, Gwardys graduated from the Electrical Department at the Warsaw Technical University, once known as the Warsaw Polytechnic (Politechnika Warszawska). Having been awarded the title of electrical engineer, he returned to his hometown. He wanted to work in Warka because, as he put it, his mother was not well, and his father had been ill for quite some time. He wound up in the Mechanical Equipment Factory (Fabryka Urzadzen Mechanicznych, FUM) in Warka, and during his job interview, he came across a former fellow student, who was more than happy to offer a job to a well-educated and energetic candidate. Gwardys worked there from 1955 through 1977 at various positions: in their planning and design department, as export representative, and investment department manager.

From 1977 through 1979, he worked in the Municipal "Peasants' Self-Help" Cooperative (Gminna Spoldzielnia "Samopomoc Chlopska”). He was an authorized representative of the Board of Directors, responsible for production and services; and deputy CEO, responsible for providing the public with supplies. At the same time, he had a farm and an orchard. From 1980 through 1990, he headed the National Council in the Town of Warka (Miejska Rada Narodowa w Warce), though he was not a communistic party member.

Gwardys was a social activist ever since his time in secondary school, when he became member of the Sodality of Our Lady (Sodalicja Marianska). He was also active in many organizations: the "Warka" Sports Club (Klub Sportowy "Warka"), where he was responsible among others for basketball popularization; the Piotr Wysocki Reservist Club of the Warka State Defense League (Klub Oficerow Rezerwy im. Piotra Wysockiego), as artillery reserve officer; and Warka Town Boosters (Towarzystwo Milosnikow Miasta Warki). He was a member of the League of Nature Conservation. Gwardys was a perennial Chair of the Wiktor Krawczyk Branch of the Polish Tourism and Sightseeing Society.

He joined the PTTK on February 1, 1957. In the years 1976-81 and 1992-2001, he was Chairman of the Board of the Warka-based Wiktor Krawczyk Branch. He gained certified qualifications as tourism organizer, tour guide on hiking trips, nature conservation officer, Warsaw-province tourist guide, FUM guide, lecturer with the PTTK Province Board in Radom, Mazovia sightseeing instructor, training instructor, volunteer historic site care-taker, and was generally a mine of information on tourism.

In 2010 passed away his beloved wife. He was left alone in an empty house, "alone with his memories. Joyous trips... my father... the tragic death of my brother... mother... my beloved wife..." He married quite late, when Alina from the Centkowski family (1934-2010) stole his heart. The couple did not have children. They lived in harmony and had great respect for each other. After her death, his health deteriorated.

Their house at Polna Street hosted many friends, who would discuss state matters and their "local homeland." History, important issues concerning Warka and Poland, deserving residents and compatriots, and memories were all subjects to be touched upon. After his wife passing, Gwardys attributed even bigger importance to those issues, which held a special value for him.

During his lifetime, he worked with PTTK-related, local, and regional press. He spoke about Warka during ceremonies, in radio programs, and on television. He was an uncanny speaker and storyteller, forever immersed in the stories on Warka and the region. He would often jokingly explain: "I was born on the 70th anniversary of the January Uprising." Using Remigiusz Matyjas words: "His stories could form a biography about a selfless and modest man, who showed that you can always contribute to the public good, regardless of the times you live in."

Our community is saying goodbye to one of the most deserving figures in Warka history. Gwardys dedicated his life to serving the public and the society as such. He taught us all local patriotism, led to monuments and tombs of Warka's greatest, and remembered their merits. He co-created Warka patriotic traditions. He took interest in Warka matters until the last day of his existence, and supported all with his great knowledge and experience.

To our Museum, Wladyslaw Gwardys was a great Friend: helpful, insightful, supportive, He shared in our joy with every success. He cooperated with us on the Warka exhibition, providing us with materials, and contacting those who had participated in the historic events. He was touched when we asked him for an interview to be used as part of the exhibition. He knew that he was speaking to the generations to come. He donated many personal photographs and documents to the Museum. But for him, our knowledge about the town would be much poorer. He was a widely respected individual, someone who cannot be replaced.

We are saying goodbye to You, Wladek, with your own words. Thank you and please know that we will not forget!

"You are stepping off your life path in a place which you always showed to your tour guests. You shall rest among those you so valued. You will take a place among Piotr Wysocki and The January Uprising Heroes, among Polish Armed Forces, the Home Army, and Katyn victims in their symbolic grave, among wonderful sightseeing experts: Fr. Marceli Ciemniewski and Wiktor Krawczyk. We are paying tribute to you and lower the banners of the Polish Tourist and Sightseeing Society. We bid you farewell on your journey to the unknown. May God accept your noble soul. You will forever remain in our memories."

With these words, Wladyslaw Gwardys said goodbye to Aleksander Gajewski in 1993.

Based on materials collected by the Museum and texts written by Remigiusz Matyjas, PhD.