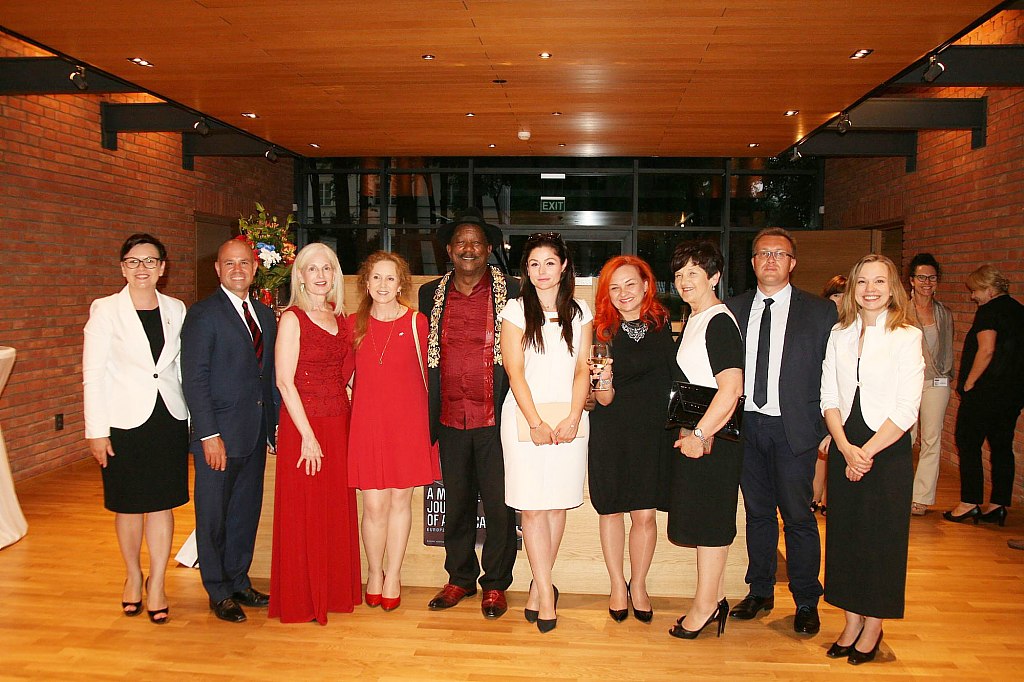 American Independence Day celebrations at The Casimir Pulaski Museum in Warka were very special this year. Many distinguished guests visited the Museum; among them were representatives of the Polish government and American citizens.

In the evening, the Museum hosted a concert by an American duet of Pamela Howland and Stan Breckenridge at the Museum and Education Center. "We, the Museum's staff, are very happy that we can meet you on the United States' 240th birthday in such a wonderful location that is The Casimir Pulaski Museum in Warka. We are meeting distinguished guests and prominent American artists. Pulaski probably never even dreamed of such a scenario, but I believe he is proud of us today," said Director Iwona Stefaniak in her address to the entire audience.

The musical journey of America

The concert by the American artists Pamela Howland and Stan Breckenridge entitled "The musical journey of America" was incredibly interesting, as it took the listeners back in time and space through decades of American history. The audience included dignitaries such as the Cultural Attaché at the U.S. Embassy in Warsaw Kenneth Wetzel, Deputy President of the City of Radom Karol Semik, Deputy Mayor of the Town of Warka Teresa Knyzio, Head of the Culture Department of the City of Radom Sebastian Rowny, Head of the 'LAZNIA' Radom Artistic Circles Club and Gallery Beata Drozdowska, American Corner Radom Coordinator Karolina Adamczyk, American Corner Radom Instructor and Education Adviser Urszula Malmon, director and journalist Jolanta Kessler-Chojecka, and architect Andrzej Bulanda.
Celebrating the United States' 240th birthday in the presence of such distinguished Polish and American guests and the wonderful Warka audience was a truly exceptional experience. After Director Iwona Stefaniak introduced the topic and welcomed guests, Cultural Attaché at the U.S. Embassy in Warsaw Kenneth Wetzel took the podium. Attaché Wetzel voiced his gratitude and thanked the Museum for celebrating such an important date that is July 4th in the family home of Casimir Pulaski. Before the concert, he toured the Pulaski manor and was very impressed. In his speech, he stressed the importance of General Pulaski's participation in the American Revolutionary War. Attaché Wetzel also quoted Pulaski's famous words in one of his early letters to General George Washington: "I came here, to a place where freedom is fought for, to serve this cause, to live for it, and to die for it." These words have a universal character and Pulaski himself is often cited as a symbol of freedom and liberty. The next speaker was Deputy Mayor of the Town of Warka Teresa Knyzio, who congratulated Americans on the 240th anniversary of the signing of the United States Declaration of Independence and presented Attaché Wetzel with a commemorative congratulatory letter.
The concert was a unique experience. The audience had the chance to see and hear two different personalities, both charismatic and emotionally connected to American music, which accompanies them on a daily basis. Pamela is a classically trained pianist, who draws inspiration from various musical genres and composers, and a fan of Frederic Chopin. Stan is a Jazz pianist, vocalist, composer, great performer with a wonderful sense of humor, and a strong, warm voice. Both tell a story about decades of American music from African-American spirituals through ragtime, blues, New Orleans jazz, and swing to modern soul and pop rhythms, which they interlace with musical pieces, turning the concert into a theatrical play.
"That we celebrate July 4th in The Casimir Pulaski Museum in Warka is no coincidence. The United States Declaration of Independence, adopted on July 4, 1776, asserted the unalienable right to life, liberty and the pursuit of happiness and the removal of governments which show a blatant disregard for such. It was a universal call on all of humanity. It is important to remember that the American Revolutionary War lasted many years after the signing of the United States Declaration of Independence. Polish heroes, most notably Casimir Pulaski and Tadeusz Kosciuszko, fought in that war.
May the Generals' dedication to fighting for a just cause serve as an inspiration for Poles and Americans to relentlessly strive to preserve the independence and freedom of both nations and the good of all people. Thank you for celebrating this day with us here, in Warka," said Director Iwona Stefaniak at the concert.
In order to organize July 4th celebrations at The Casimir Pulaski Museum in Warka, the Museum partnered with the U.S. Embassy in Poland, American Corner Radom, and 'LAZNIA' Radom Artistic Circles Club and Gallery. We would also like to thank our sponsors Mr. and Mrs. Jaroslaw and Angelica Nowociel, owners of the "Koneser" Warsaw Distillery, from Grzegorzewice.