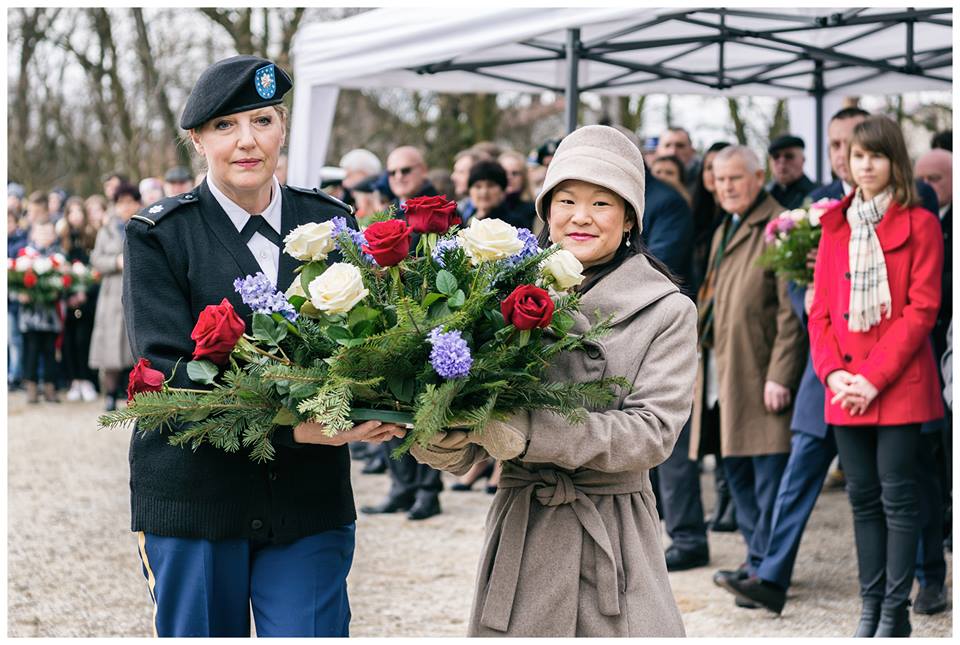 On March 6, 2017, our Museum celebrated the 272nd Casimir Pulaski’s birthday anniversary. Traditionally, the local community gathered in front of the Pulaski manor in Warka-Winiary to honor the memory of the Hero at the foot of his monument.

The celebrations commenced when Patrycja Lisek and Julia Donica sang the national anthems of both Poland and the United States. Museum Director Iwona Stefaniak welcomed the guests and presided over the annual wreath-laying ceremony at the foot of the Casimir Pulaski Monument.

Soon after, the gathered visited a new open-air exhibition entitled “I was here in... 1967-2017” (Byli tu... 1967-2017), depicting celebrities from the worlds of film, theater, music, drawing, graphic design, politics, and diplomacy, who have visited The Casimir Pulaski Museum over the 50 years of its existence.

The guests were shown to the Museum and Education Center to participate in the ceremony unveiling the winners of the first stage of the fifth PULASKI'S TWO FACES. History and maritime competition (Historyczno-marynistyczny konkurs DWA OBLICZA PULASKIEGO). The competition is aimed at all secondary school students from the entire Mazovian province.

Later, the audience could enjoy a screening of the film “Raising spirits. Casimir Pulaski Day Parade” (Ku pokrzepieniu serc – Casimir Pulaski Day Parade), followed by a speech by the film director Artur Dybanowski, who had been the Parade’s Grand Marshal in 2015. The 272nd birthday celebrations were also reflected in the speech by Commander Pawel Werner. Both Commander Werner and Mr. Dybanowski were presented with commemorative Casimir Pulaski Medals for disseminating the knowledge on the Hero of Two Nations.

In recognition of the 50 years of Casimir Pulaski Museum, Director Iwona Stefaniak had been named Honorary Grand Marshal of the 80th Pulaski Parade in New York, which is scheduled to take place on October 1, 2017, and asked to participate.

The ceremony concluded with a concert entitled “Violin and Guitar Classics from Pulaski to modern times” by Strzelecki-Garlinska Duo, including Mateusz Strzelecki (violin), and Paulina Garlinska (guitar).

The Casimir Pulaski Museum would like to cordially thank all guests for their active participation and engagement. We would like to especially thank our partners and sponsors for helping us organize the 272nd Casimir Pulaski Birthday Anniversary: The “Manor at Dluga Street” Municipal Cultural Institution, Zajazd na Winiarach Restaurant, WARKA Brewery, and KAZANA Bakery – Alicja and Jozef Kazana from Warka.