The Long Night of Museums was a success 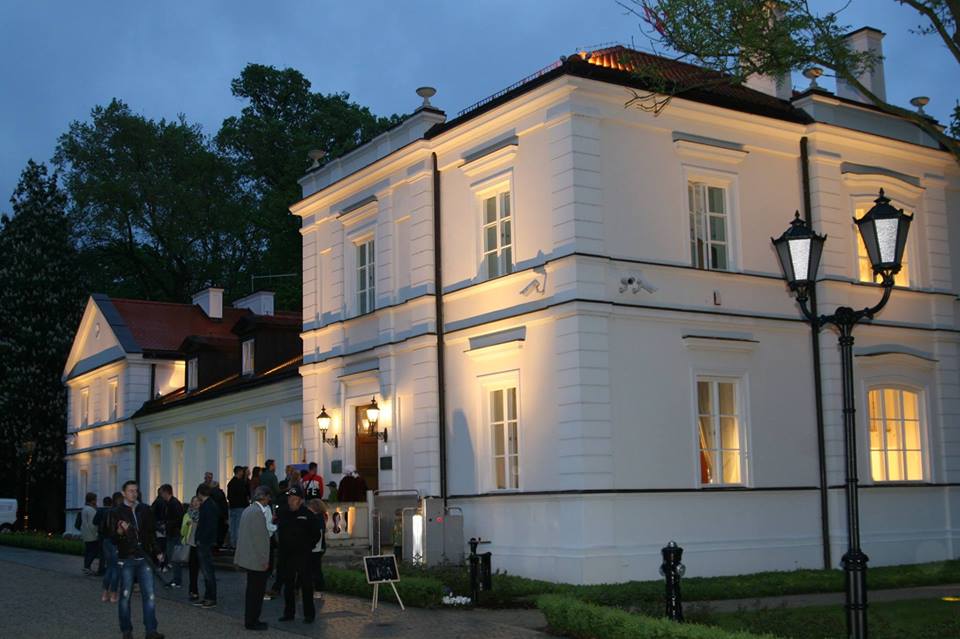 Despite the cloudy and rainy weather on the night of May 14, crowds flocked to the Casimir Pulaski Museum to celebrate the Long Night of Museums. The Museum was open to visitors from 4pm to 3am and attracted 1148 people who toured the Pulaski Manor. The Museum and Education Center hosted 702 visitors. Especially popular were, as always, the gowns and attire of the Museum's employees, which reminded guests of the times of Casimir Pulaski.

This year, visitors were able to see two exhibitions: "Casimir Pulaski and Great Poles in the USA" as well as "Warka – a place touched by history." The official guided tour of the Museum's park started at 10 pm. The Manor reverberated with music throughout the entire event thanks to Mateusz Miziolek, a talented young pianist from Warka. Over 300 preschool and schoolchildren visited the Museum that day and were presented with candy and balloons. Even Casimir Pulaski himself visited the Museum on that night, this time dressed as… Batman! Children were more than happy to greet him and take commemorative photos. Many also took photos with the poster promoting this year's Long Night of Museums in Warka and appeared as Batman themselves.

The concert hall of the Museum and Education Center was filled with music from 8pm to midnight. A series of concerts by Warka's finest attracted a wide audience. The visitors listened to a concert by students of the Cantabile School of Vocal and Instrumental Arts led by Miroslaw Osiadacz, little known songs of Seweryn Krajewski sung by Bogdan Sabala and Slawomir Klimczuk featuring Marta Galinska, and "Hand band" by Darek Raczka Trioz. Music lovers could also listen to live accordion music by the talented Damian Sabala and piano tunes by Mateusz Miziolek, who chose to take his audience on a "Night with Nils Frahm."

The Museum and Education Center hosted a night of historical board games. Miniature war game "Gods of War ¬– Napoleon" and science fiction strategy game "Full Thrust" were among the most sought-after items thanks to their visual appeal, beaten only by family board games "Splendor," "Colt Express," and "Camel Up." The latter were so popular with the public that visitors had to patiently wait their turn to join in. The vast majority previously had no contact with modern board games. We are certain that the Long Night of Museums opened the eyes of many residents and made them realize that board games are not only "Sorry!," "Monopoly," and infantile child's play, but can be engaging and intelligent entertainment for people of all ages, says Marcin Koc from the Warka-based Board Games and Fantasy Club (Klub Gier Planszowych i Fantastyki), who organized the event.

Many residents came to the Museum and Education Center simply to see the newly opened building. We did not receive any negative feedback and the architecture was well-liked.
We would like to thank all guests for visiting the Casimir Pulaski Museum in Warka on that special night. Though it involved much work on part of the Museum's employees, the Long Night of Museums gave us a joyous opportunity to meet the public  from which we derived great pleasure.

The first Long Night of Museums took place in January 1997 in Berlin. It was such a success that similar events started to spread throughout Europe, including cities like Paris and Amsterdam. Currently, the event is held in over 120 of Europe's biggest cities and celebrated by thousands of museums on the entire continent.
The International Museum Day (IMD) is an annual holiday celebrated on May 18. It was established on May 28, 1977 in Moscow, Russia by the International Council of Museums (ICOM), which partners with UNESCO. The IMD is celebrated worldwide by respective countries through exhibitions, seminars and meetings with the public. Since 1997, the IMD has been celebrated under different slogans, chosen by the ICOM's Advisory Committee. This year's theme is Museums and Cultural Landscapes. It stresses the role of museums as institutions responsible for upholding their cultural landscapes by collecting and sharing reliable information and experiences, and managing and protecting them as to maintain them for future generations.
Museums fulfill their mission to care for cultural heritage within their walls and outside of them. They try to raise awareness among local residents and those visiting their collections and educate them on their basic values in order to inspire the society to work toward protecting, promoting, and enhancing the status of the cultural and natural heritage of the land.
Let us remember that the mission of the Casimir Pulaski Museum in Warka is to cultivate the memory and protect the material heritage of the Polish-American Hero Casimir Pulaski, Polish expatriates, and especially those who have emigrated to the United States of America, and the protection of the tangible and intangible cultural assets of the Grojec and Warka lands. What is more, the Museum is firmly vested in providing the public with reliable information and education, and, last but not least, creating patriotic stances and connections with those to whom we are linked by history.
The Casimir Pulaski Museum manages a historic park with an area of 15 hectares (over 37 acres), located on an escarpment beside the Pilica River, and is part of the NATURA 2000 network of protected areas. The District of Grojec has been the Museum's administrator and owner of the Manor and park in Warka since 1999.
Iwona Stefaniak
Director of the Casimir Pulaski Museum in Warka
View the embedded image gallery online at:
https://muzeumpulaski.pl/en/events/night-of-museums-and-other/120-the-long-night-of-museums-was-a-success#sigProId2ea4e39799

The Museum is open Tuesday through Sunday.