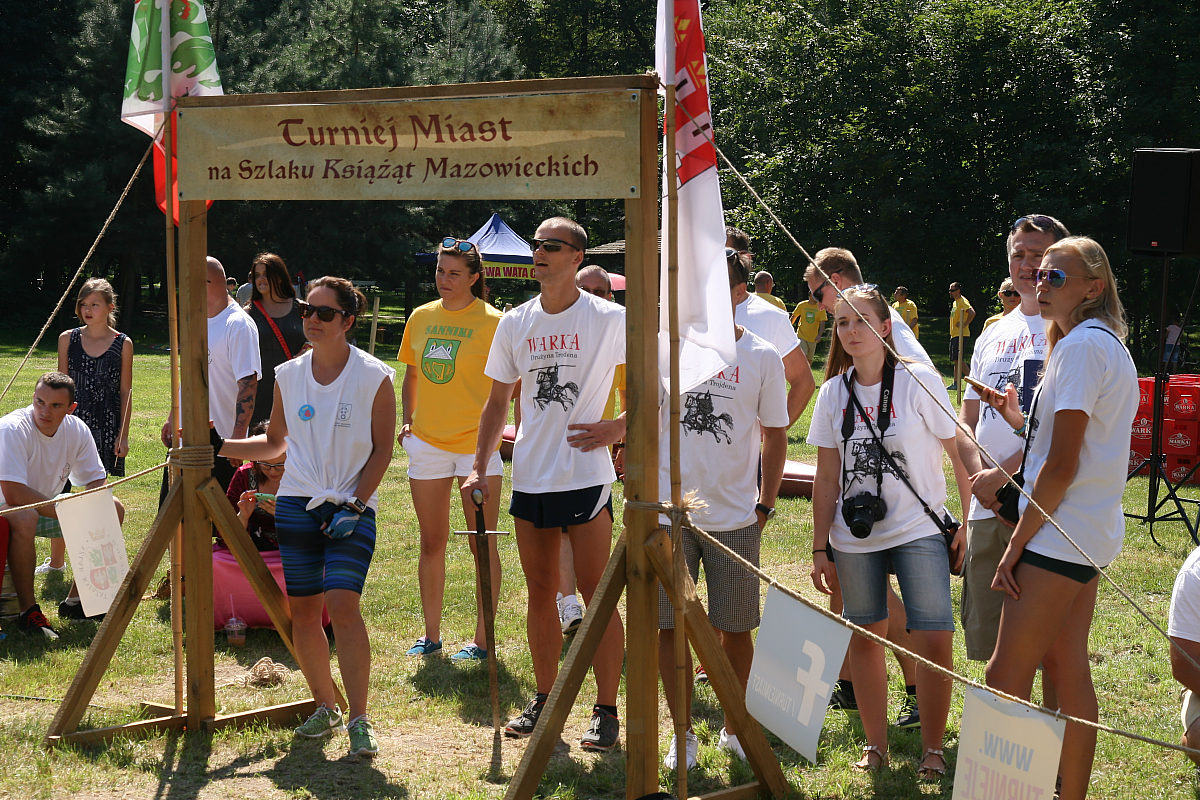 The fifth round of the Tournament of Towns on the Mazovian Princes' Trail (Turniej Miast na Szlaku Ksiazat Mazowieckich) took place on August 20, 2016, in the historic park in Warka-Winiary.

The labyrinth decided the game

The tournament in Warka started with a mysterious-sounding sport of Prince Trojden's Apple (Jablko Trojdena). A representative from each team was asked to make it through an obstacle course while wielding a sword. After making several precise cuts, they were required to throw a javelin and hit... an image of an apple.
The second trial called Warka Pyramid (Warecka Piramida) involved a winning combination of strength, speed, and dexterity. Teams were asked to construct a pyramid using beer kegs as quickly as they could.
The third competition named Pilica River Meander (Warkocz Pilicy) was almost an Olympic sport. Its winner proved to be the fastest in a kayaking race on... grass. Similarly to mountain kayaking, teams had to correctly negotiate gates in upstream and downstream directions.
The first three sports concluded the first stage of the competition. Warka-based Prince Trojden's Team, including Mateusz Wdowiak, Tomek Chojecki, and Bartek Kuna, and the team from Ostrow Mazowiecka shared first place with 21 points each, and the second stage of the competition was to be a game changer.
Warka Triathlon (Trojboj warecki) included three subsequent time-sensitive sports. Speed, dexterity, and agility were all tested in obscure labyrinth corners, which hid three tasks thematically connected with beer. Each team member had to tackle a different challenge, with the first one having to find all cans with the golden liquid scattered around the labyrinth, the second having to discover all the beer labels and use them to complete a password written on the back of the labels (which enabled the team to leave the labyrinth), and the third teammate having to run down the labyrinth with a tray holding three beer mugs full of water without spilling a single drop. Warka team was the quickest to handle the triathlon tasks, and won the fifth round of the town tournament.
Thanks to their win, the Warka team's overall standing improved. They are now in second place and have a chance at taking the tournament cup. Fingers crossed they bring it home in the next round, scheduled on September 4, 2016 in Zwolen. Put your cheering caps on and participate! Fans and their friends and families, especially the young ones, will have the chance to get entertained in a myriad of ways. The biggest one is literally huge – the largest inflatable bouncy castle in Poland! Children will also be able to make their own shields and balloon weapons. Volunteers from Warka middle school will be there to assist them.
The competition on Saturday finished on a high note – a concert by Carpe Diem bandleaders Szymon Wydra and Zbyszek Suski.